This is a GPU implementation of Christopher Kulla and Marcos Fajardo’s EGSR paper, “Importance Sampling Techniques for Path Tracing in Participating Media” – in a nutshell, this is volumetric path tracing with a novel importance sampling technique called equiangular sampling that is used to minimize the variance of a fixed sample budget. This algorithm is capable of creating stunning imagery akin to the rocket launching scene in the feature film Men in Black 3 (click or see the paper link above for images). The goal was to create a binary executable file that weighs in at less than 4 kilobytes in size and runs the algorithm in real time. The results are the following: one bare bones implementation (1570 bytes), and one with simple ray-sphere intersections and visibility checks (1890 bytes). Note that it is based on an equiangular sampling implementation on shadertoy, make sure to check it out! I think an extension with heterogeneous participating media and Woodcock tracking would still fit easily in less than 3k. 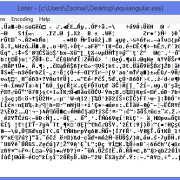 Image of the binary

Two Minute Papers – What a time to be alive!
Scroll to top