When observing natural phenomena in our everyday life involving complex fluid flows, one may feel that it ought to be immensely difficult to understand the underlying laws of fluid motion. More than a hundred years ago, Claude-Louis Navier and Sir George Stokes came up with a short universal formula that describes the motion of incompressible fluids. This made us realize that these underlying rules are surprisingly simple: even the most difficult looking flows can be understood by the evaluation of only three terms. Implementing a fluid simulation program on computer hardware based on this equation is not a trivial problem, however, it is quite rewarding: these simulation programs serve a vast array of applications in physics- and engineering-related problems. In this thesis, based on previous research work, we show a highly parallel framework that is capable of giving an effective numerical solution of the Navier-Stokes equations. Here we also address the fluid control problem, where, alongside simulating the motion of fluids, an arbitrary density distribution (a shape of any kind) is given, and forces are exerted on the system with the intention that the fluid would sooner or later take this form. Prior research work had shown that the problem is of enormous difficulty due to multiple reasons: first, every region is tightly bound to its neighborhood, therefore a force that acts upon a point in space will also have effect on nearby regions, therefore making the controlling process unpredictable. Second, it also a desirable, but ambivalent requirement that the controlling external force field should make the fluid flow realistic, even though it is highly improbable that a given volume of water would suddenly flow exactly into a shape of a human face or a skyscraper. Utilizing highly sophisticated mathematical methods from different fields such as optimization and control theory, current state of the art methods are able to give visually pleasing results at the cost of 5 to 7 minutes of computation time per frame, effectively taking more than two hours of time for every second of video footage. In this thesis work, we present a novel solution for the fluid control problem, making it possible to solve it in real time, even on home computers with limited processing power. 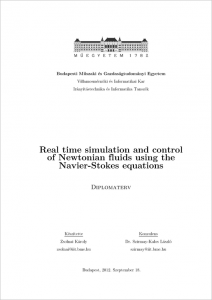 Please click here to obtain the citable version of this paper.